Join my newsletter for more awesome information about ASD

Boardgames and card games are perfect for supporting social and emotional development. Especially in this time of COVID, where people are worried about the social development of children, boardgames can really help encourage learning of crucial social skills, including winning & losing, turn-taking, sharing, and much more. Plus this week on the blog I dive into microgames, a genre of super fast, easy-to-learn games, thanks to teacher Richard Black.

What this podcast contains

✅ Why talking about your own emotions is important

✅ Sue reads an excerpt from the book, The Red Beast (check out my podcast where I interveiw the author here)

✅ How to use the Socially Speaking Boardgame at home & school 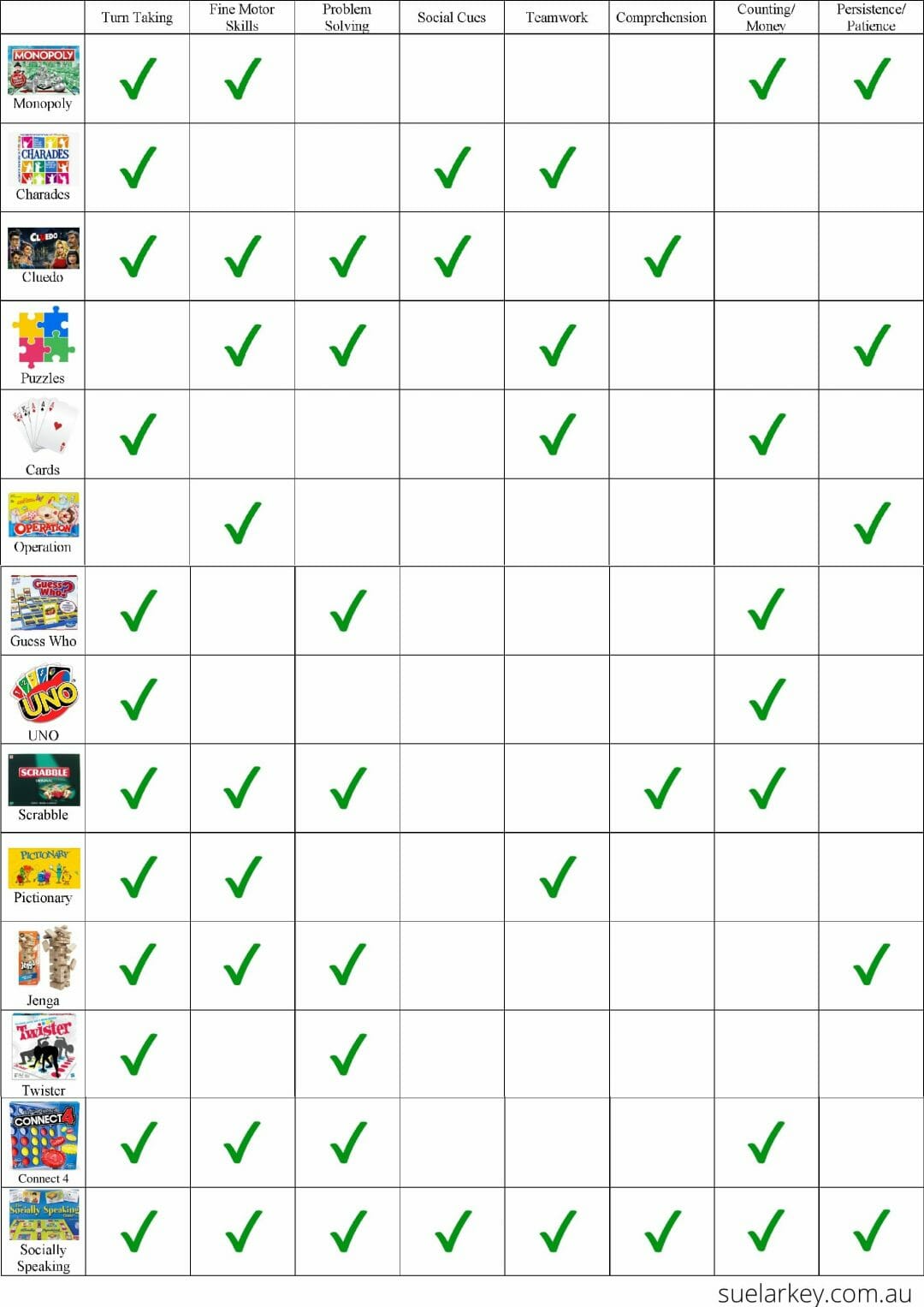 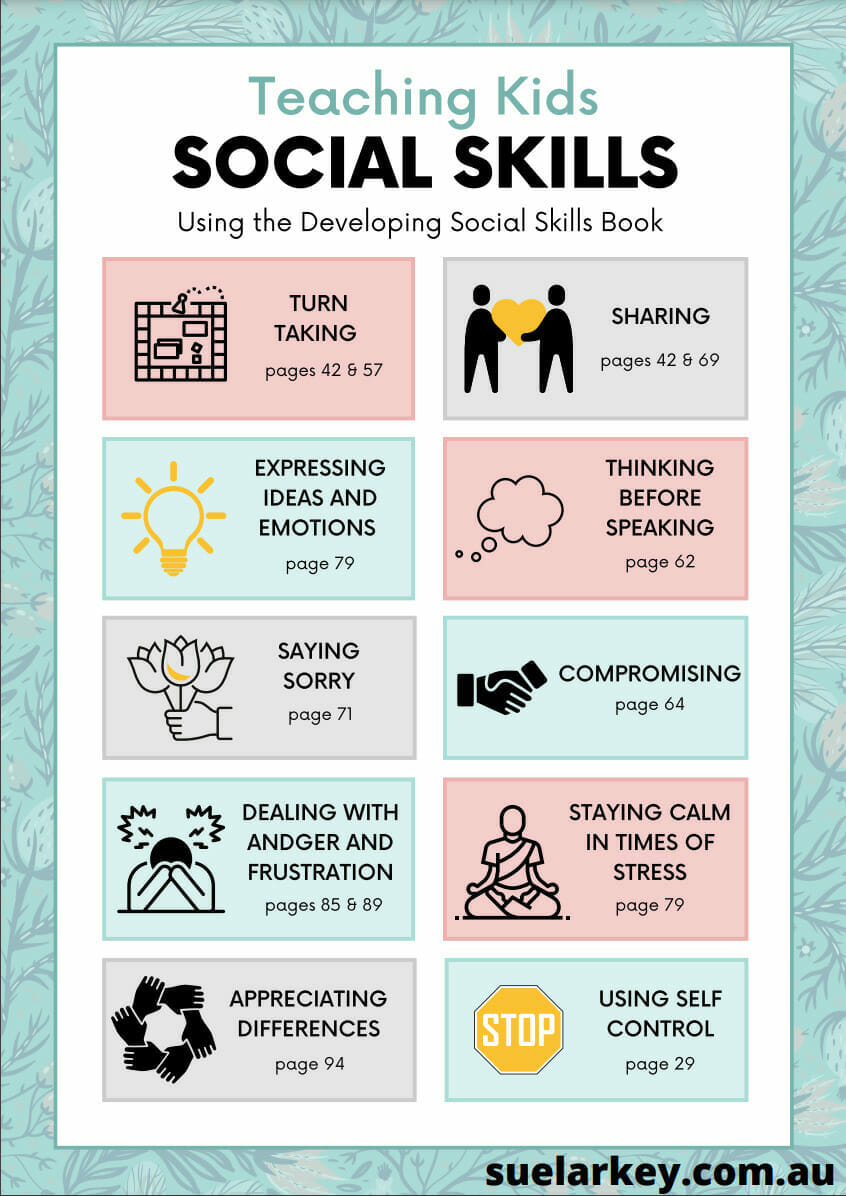 During my last podcast on boardgames, I mentioned a simple social script on winning and losing. Winning and losing can cause many arguments, and it’s important to teach children how to react in both situations BEFORE you play the game. To listen to me talk about it, check out Episode 126: Using Games to Teach Part 1 – All the Skills you can Learn, at about 16 minutes in. To download the social script, click below. Feel free to make it your own with pictures!

Last time I did a podcast on boardgames, I had a teacher reach out to me about micro games. Richard Black (from The Knox School, Melbourne) explained that micro games are so-called as they generally last less than 3 minutes per round or per game.  Some of these could be won within 15 seconds.  There’s so much to learn from such rapid winning and losing situations.  The ‘ante’ or ‘investment’ (time/emotion) is reduced greatly. There’s no playing the long game with these.  There’s no 1hr investment of time and energy only to lose at the end.  They aren’t ‘zero-sum’ games – there are winners and losers – but we see far less anxiety when the kids know that it’s just a quick game and they can try again many times easily.

Top Trumps
Let’s kick off with a winner in every classroom I’ve lead:
Top Trumps. Oldie but a goodie.  There are so many themes out there now and they don’t cost the earth.  Got a few kids with particular interests like cats, cars, boats or trucks… Top Trumps is the way to go.  Got a kid with a very particular special interest like Keys, you can make your own sets of Top Trump cards. There is a competitive element to this game where kids need to accept that their card didn’t prevail in a comparison.  There are conventions to follow that are subtle but hugely important.  One must only play the top card in their hand.  Kids naturally want to look through to find a better card.  They need to learn that playing fair means sometimes winning and sometimes losing.  This game might run for 10 minutes but there are micro events throughout the game where children experience winning and losing.  My current 6yr olds play this daily (when they aren’t in lockdown of course).

Love Letter
Next I’ll touch on the real Micro Game genre with Love Letter – a card game that can take 3 seconds or 3 minutes.  This game has a particular set of rules that take a few minutes to learn, but I’ve used it with my 6yr olds this year and they ‘get it’.  There are only 16 cards in the deck.  The game can be won and lost before you’ve even had a turn and we all know it doesn’t matter.  This game has some elements of elimination in it, which can be challenging to learn, but so powerful if done in a controlled fashion.  I model how to respond to being eliminated many times for my kids who need that level of social modelling.  We don’t use the victory tokens for who has won the most rounds.  We just enjoy winning and losing – then we shuffle and start again!  There are heaps of versions of LoveLetter out there online, and they usually sell for about $20-25.
Many of my classes have made their own LoveLetter cards using their own themes too.  SO fun.

Pass the Pandas
This is a dice rolling game with very few rules but lots of taking turns, following instructions, winning and losing, problem solving, counting and more.  Roll the dice, take the actions, get rid of your dice, someone wins within 2 minutes, laugh and start again.  This one has some elements of choosing others to give dice to so there is a small element of conflict.  Again, modelling this for my kids has been really important.  They learn to see someone ‘targeting’ them in the game as a compliment.  This game can be replicated at home with simple d6 dice.  We have been playing using virtual dice from a website called toytheater.com while we’ve been online.
1,2,3 = blank  4=bamboo 5=panda 6=water.  Simple.

Pizza Party
Another dice game but this time it’s all about racing each other in parallel play.  There is no handicapping of opponents and the game is a straight up race to match your dice to images on a pizza slice.  We call out, “Mamma Mia!” when each slice is completed.  Two (or more if you buy/make multiple sets) kids play simultaneously – having dice boxes to roll into is a godsend here.  There is a narrative in this game of fair play.  If we are playing parallel and simultaneously, I need to trust that you are playing by the rules.  The game lasts no longer than 3 minutes then you can grab new slices and start again.  Another game that is easily adapted for normal d6 dice.

Sleeping Queens
A fan favourite in my class this year – takes about 10-15  minutes to play so doesn’t exactly fit in the MicroGames genre.  This one requires knowledge of simple addition facts in order to pick up power cards.  These can be used to attack or defend.  Attacking is focused on putting an opponent’s woken queen back to sleep with a potion or stealing her with a dragon.  Defending uses a wand to protect from sleeping potions or a knight to scare off the dragon.  Again, there’s the conflict element where we discuss what a compliment it is to be targeted.  Beautiful cards, cool theme, maths element, quite quick, social story revolving around the conflict element.  Great game.

Tsuro
Beautiful, tactile, tile placing game which starts as parallel play until later in the game (5-10 minutes) when things get a little crazy.  Players choose a tile to place and follow a path with their token.  The aim of the game is to stay on the board.  That’s it.  When paths cross in the middle of the board, people can be eliminated quite suddenly.  We learn to laugh that off and watch for the remaining 1 or so minutes to see who wins that round.

Spot it!
Brilliant matching game for kids.  The design is seeded in mathematics but the game play is 2-3 minutes of fast-paced competition.  Winning and losing doesn’t matter because it is over so fast – though I’ve always spent time (as with each of these games) running through social stories about why it doesn’t matter and how to respond when you don’t do so well in a round.  There are have been a few different versions released lately, but unless you are down with complex maths, making your own is a brain bender not worth trying.  Looks so simple, yet so complex.  Beautiful, fast, fun, exciting, (sometimes overstimulating… and there’s a conversation to be had there) game with quick results and opportunities for many rounds.

"I love the Sue Larkey Podcast" <-- If that sounds like you, please consider rating and reviewing my show! This helps me support more people - just like you. Click here, scroll to the bottom, tap to rate with 5 stars, and select "Write a Review." Then be sure to let me know what you loved most about the episode!

Also, if you haven't done so already, follow the podcast. I'm adding a bunch of bonus episodes to the feed and if you're not following there's a good chance you'll miss out. Follow now!

Schools may order and pay on invoice via direct credit or cheque.

Please download the order form below. All prices are quoted in full and include GST.

For all orders outside Australia please email [email protected]

Allow 7-10 days delivery (our Warehouse is based in Orange)

We use Australia Post for all our orders. If you wish to track your order we recommend you sign up here www.auspost.com.au for their free tracking service